Armor/AFV: What If?
For those who like to build hypothetical or alternate history versions of armor/AFVs.
Hosted by Darren Baker
What if Panther II, US ARMY!

I just finished my last model, except a figure which I must paint now. It is a risky idea, but funny anyway, which allow me freedom to make a different camuflage and different ideas.

here I put the history and explanation, and you can see more pictures in my blog:

I remember to have read in a book (maybe from Albert Speer) where supposedly, a cracked German government's part, wanted to force an alliance with the United States to fight against the communism. In fact, some of those Germans attempted without success the alliance until the last days of the Reich. It is also said that, the Germans facilitated and even favored subtly the allied advance in the eastern front, to be able to force them to fight against the Soviets. For Hitler has been a perfect solucción to avoid the destruction of his empire, but fortunately, the Americans didn't have any intention of allying with the Germans in a suicide.

This Panther is an example of what could have been if German and Americans have united their efforts to stop the Soviet locomotive. Surely, the Americans had put to their service some of the best German weapons. The German factories would have renewed the production to increase the number of tanks and vehicles in the battle field, but mainly to increase the quality and to take advantage of the proximity of the production place. Maybe, the Americans have carried out small changes, perhaps in the camuflage, the identifications, or secondary armament or radios.

My Panther II have an American radio and a German one too, to be able to communicate with all type of vehicles. Also, they have applied some stains of American green color on the German original camuflage, a little worn away.

The most important thing of everything is the infinite possibilities of combinations to make dioramas and ideas under the concept of that possible alliance. I hoep you like this "what if" history". 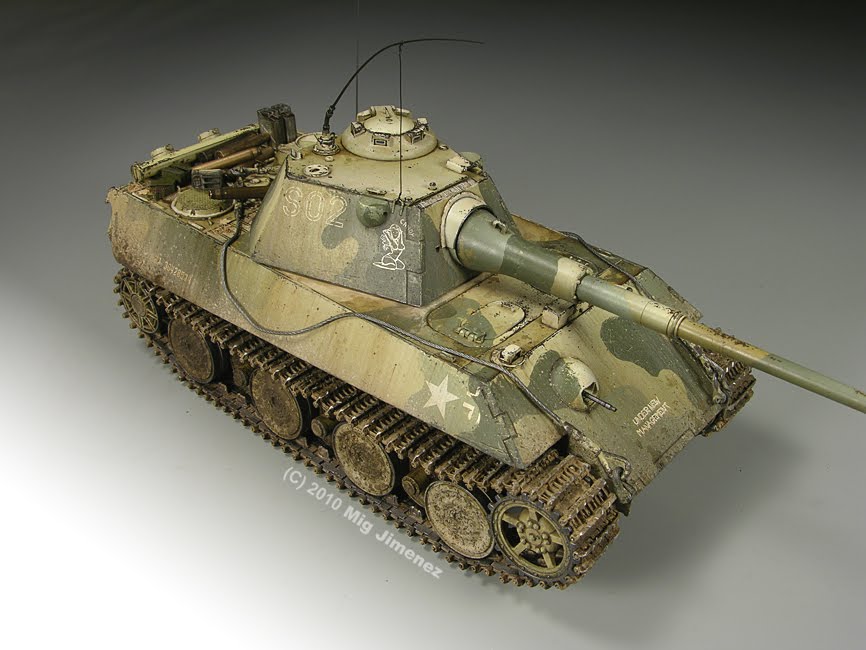 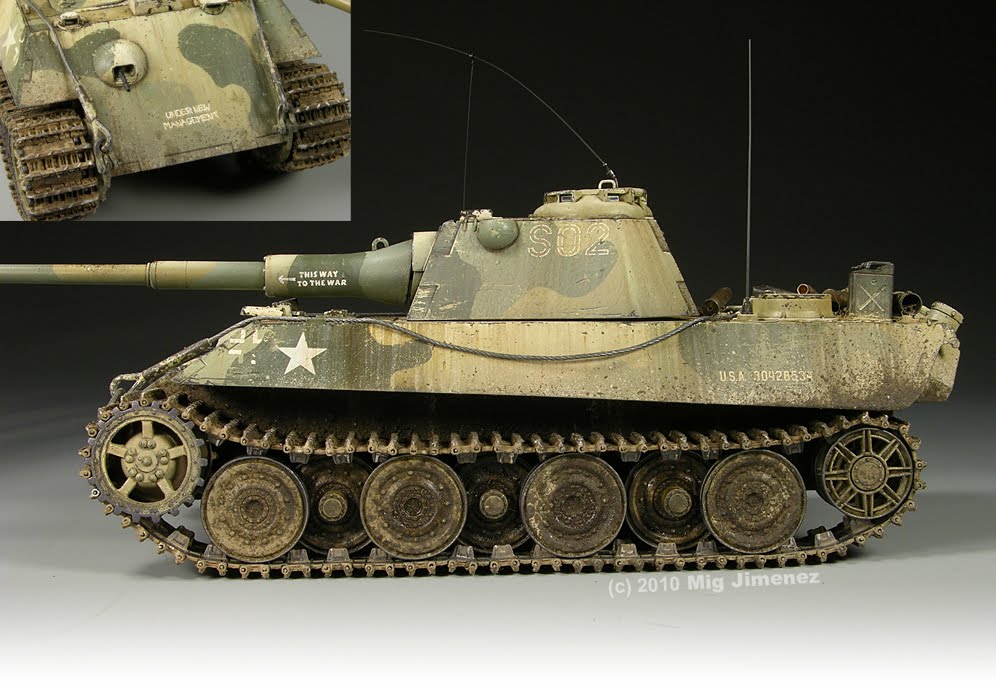 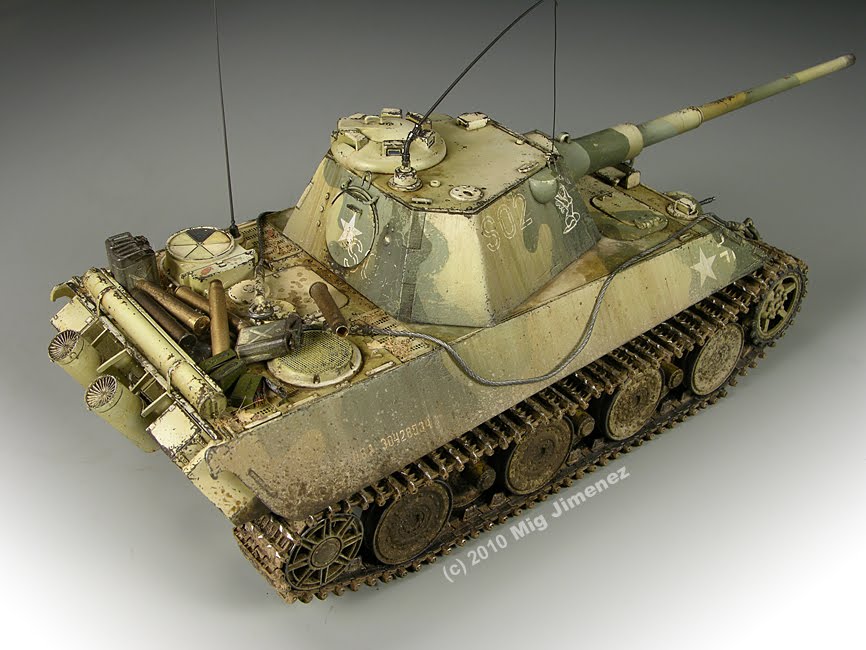 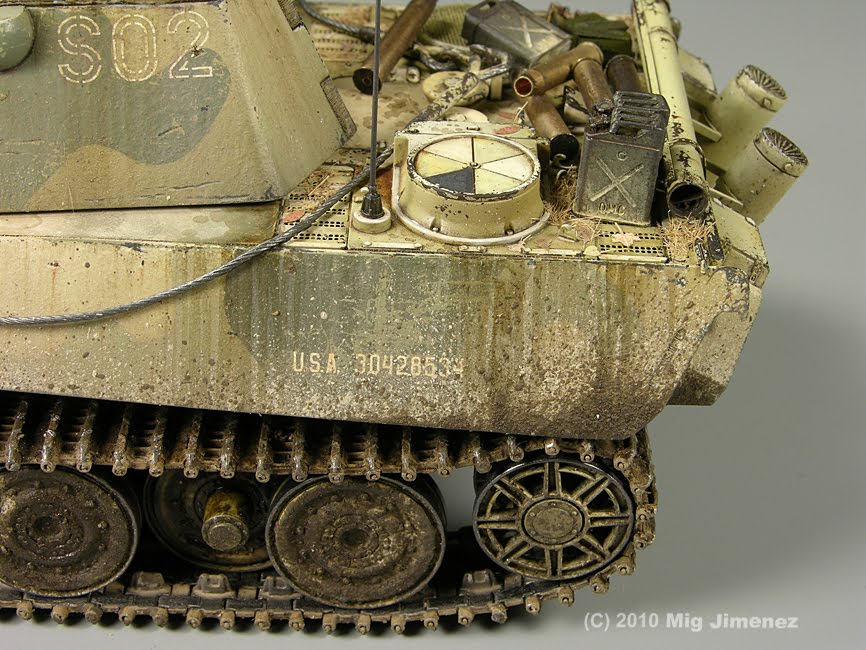 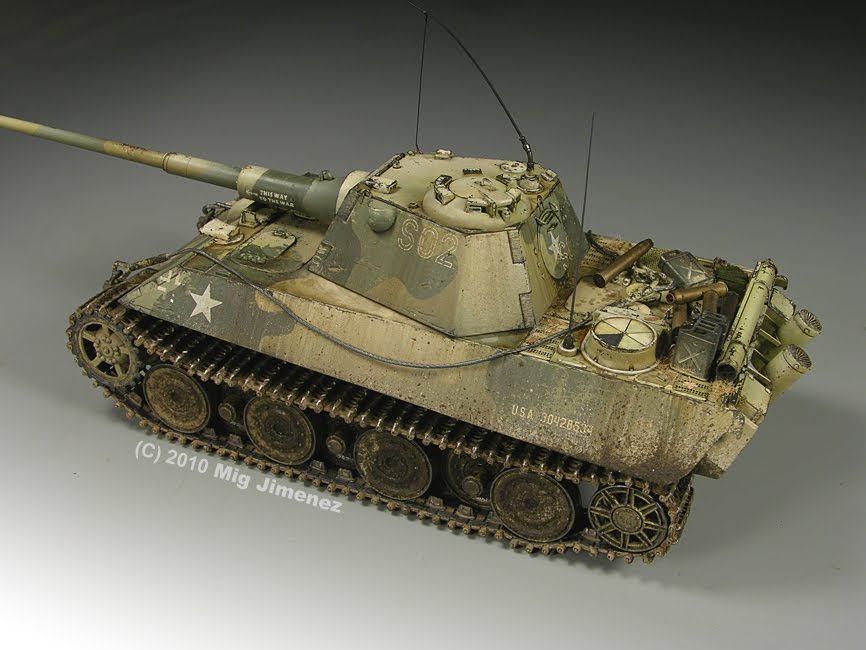 I love 'what ifs' but this one never occurred to me even though I've read about this German idea a couple of times (Anthony Beevor mentions it in several of his books on battles of WW2).

The camouflage and markings are simply spot on. Especially the 'This Way to the War' and 'Under New Management' ones. Did you do those yourself Mig?

REPLY & QUOTE
GALILEO1 (Rob Carvallo) said
Excellent in all respects, Miguel! Love the weathering. You sir are really an inspiration!

REPLY & QUOTE
Kuno-Von-Dodenburg (Steve Riley) said
Very nice, Mig. Very nice indeed. I do enjoy a good "what if", and this certainly fits the bill in every respect.

Is the kit the old DML offering, and did you make any alterations to it?

REPLY & QUOTE
I don't need you - sixty feet of bridge I can pick up almost anywhere.

REPLY & QUOTE
chnoone (christopher noone) said
What do you mean with "what if" Panther II.
The Panther II is currently in service with the U.S. Army .... but it doesn't anything like yours

But yes, your looks quite nice too !
Nice paint job, weathering looks realistic too, looks like you will get away with this one .... again!

REPLY & QUOTE
" He who seeks to defend everything, defends nothing " Frederick the Great

REPLY & QUOTE
SteveReid (Steve Reid) said
Mig-
the variation in colors, the chipping, the rain streaks, oil stains, the straw and leaves on the engine deck... on and on..

Really some thing to aspire to. Love it!

REPLY & QUOTE
spitfire303 (Pawel RZYMSKI) said
ufffffff that's just a great piece of a Panther Miguel!! I love your work. If you could be so kind and give me (us) few hints about the weathering (especially the sides) and as I'm always I'm interested what did you use to make that hard edged camouflage. I guess it's airbrushed, the masking was made with masking bands like tamiya, a liquid mask ... or it's a free hand camo? Non.... too perfect for free hand...

thanks for sharing
spit

Win The Firefight, Protect Your Brothers, Leave No One Behind.
Survivor of 7 rotations, last 3 in the sandbox.

"Gone toe to toe with the Taliban, and won."

REPLY & QUOTE
CMOT (Darren Baker) said
A very good model of what if WW2 1946 occured, and it shows that you continue to improve your style.

REPLY & QUOTE
"Do not allow yourself to be programmed." UR, Detroit

REPLY & QUOTE
Jmarles (Julian Marles) said
As usual, your work is very cool! I always thought it would be cool to arm a German tank with an American gun, as an interm solution until German industry stabilizes. Maybe a Pershing/Panther?

REPLY & QUOTE
padawan_82 (Ant Wilkes) said
very nice, it's good to see one of the Modelling Masters showing us newbies (i'm talking about myself in that regard) how it's done, just one observation, and this isn't a critism, i wouldn't dream of critising one of my betters. but if it's an American Panther II wouldn't they have a turret mounted 50. Cal? just my two cents, other than that excellant build

REPLY & QUOTE
IMMORTALITY! take it it's yours - Achilles siege of Troy.

REPLY & QUOTE
metooshelah (Nathan Ram) said
very nice!
not much into what-if, but this model looks very nice.
why didn't you tie the equipment on the back with some thing?
the minute the tank's stated moving, it will fall down

REPLY & QUOTE
George: "If we do happen to step on a mine, Sir, what do we do ?"
Blackadder: "Normal procedure, Lieutenant, is to jump 200 feet in the air and scatter oneself over a wide area."

REPLY & QUOTE
Jenseits (Nicolas Cabaret) said
masterful technique. like I told you once "the panzer is great and you are his prophet"

REPLY & QUOTE
"He would have finished him off then and there, but pity stayed his hand. It's a pity I've run out of bullets, he thought, as he went back up the tunnel... "

REPLY & QUOTE
TankSGT (Thomas ) said
Excellent work from a master. Just a thought for the next what if. A late model Sherman cupola and a Browning 30 cal in the hull, and as mentioned earlier the ubiquitious(sp) 50 cal on the turret. No American tanker would leave home without it.

Excellent work from a master. Just a thought for the next what if. A late model Sherman cupola and a Browning 30 cal in the hull, and as mentioned earlier the ubiquitious(sp) 50 cal on the turret. No American tanker would leave home without it.

I was thinking the same thing. Hate to say it he needs to go back and add a 50cal on the roof mount for the TK commander.

REPLY & QUOTE
"Remember man as you pass by, as you are now, so once was I. As I am now, so you shall be. Prepare for death and follow me."

REPLY & QUOTE
Graywolfgang (Fred [ Wolf ] S. Peterson) said
Hay Guys, Ive be away for some time. I like you cirnareo. This is what I though about when I did my Rail Station.

"Back to Old Mother Russia"
Except This Time, With a Difference

Hitler died in late 44 of a Heart Attack. Germany sued for Condishinial Surrender. The SS wear disbanded, a new unit The Wolfs Guard was formed. The Maltese Cross replaced the Swastika on all uniform emblems and flags. The German War Machine was allowed to continue to build and develop equipment and arms.
This is a combined force of German and Allied Forces disembarking from a freight train on their way to OLD MOTHER RUSSIA Spring 1946. The Freight Train is being accompanied by a BP-46 Armored Train.

REPLY & QUOTE
"Remember man as you pass by, as you are now, so once was I. As I am now, so you shall be. Prepare for death and follow me."