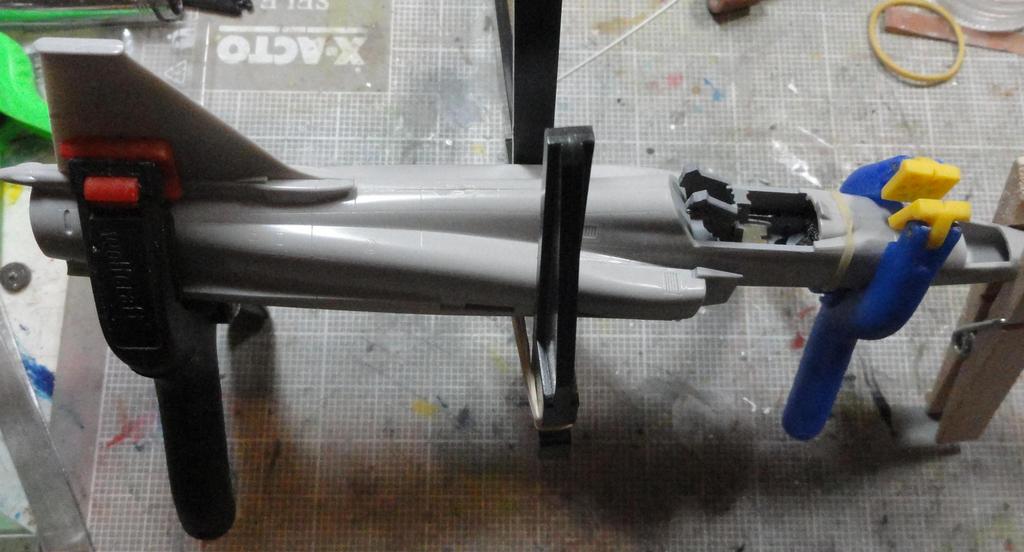 Not perfect paint job, but nevertheless a fun build. Part fit was excellent with minor issues in wing to fuselage joint. Not a problem, but having a half a mm too short canopy was bit of a nasty surprise. I think I got it solved reasonably well with paint and careful application of CA. Would probably make sense to leave canopy open, which would solve the issue.

There are two more photos in the gallery .

And good luck to others with your builds, still few weeks to go.

I've got the dullcoat on now and ready to start attaching fiddly bits this weekend. Home stretch!

REPLY & QUOTE
On the bench:
Accurate Miniatures 1/48 P-51B for the Mighty Eighth Campaign
Tamiya 1/48 P-51C for the Big Three Campaign

AMK 1/48 Kfir C7 in the colors of 144 Sqn. IAF late 1980's-early '90's. I substituted a different aircraft number and name from the Kinetic kit as I always wanted to use that number style.

A nice kit if a bit vague in fit in a few places. But it looks good finished!

Here it is with a Kinetic C2 I did a couple of years ago.

More pics in the gallery. Great campaign John, and good luck to everyone who hasn't finished yet!

REPLY & QUOTE
On the bench:
Accurate Miniatures 1/48 P-51B for the Mighty Eighth Campaign
Tamiya 1/48 P-51C for the Big Three Campaign

Terrific job on the Kfir Michael !

Unfortunately we have a new pet at home, in an oversight I destroy the model 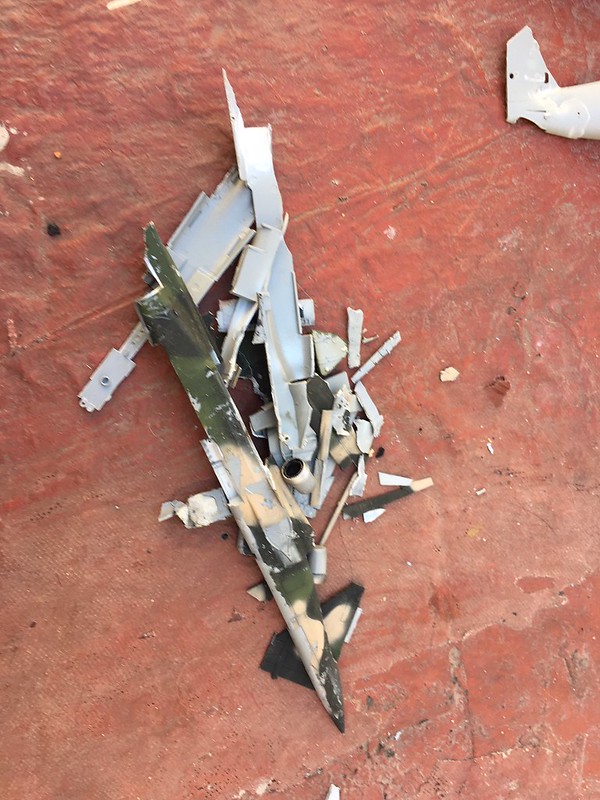 REPLY & QUOTE
Buckeye198 (Robby) said
Jose, looks like a SAM really did a number there :/ sorry to see the kit end that way!

I haven't had THAT much trouble with my build, but I certainly haven't had the time I wanted to finish my full diorama idea. The Harrier is just about done, just need to put in a pin wash and some clear parts. I also apologize, I completely neglected to take pictures since my last update

Finished project pictures coming soon, and I hope everyone else's builds are wrapping up nicely too!

REPLY & QUOTE
Buckeye198 (Robby) said
Okay, finally ready to post pictures. The model is complete, sans armamentIll get to that in a bit. It's not perfect, but time is simply up and "done is better than perfect."

I dont have easy access to paints made for modelers, so I mostly use airbrush-ready acrylic paints from my local art supplies store. Pros: cheap, accessible, decent color spread, removable tops make for less wasted paint. Cons: average pigment density and uniformity, and while I personally enjoy mixing my own colors it does not make for convenient (or often matching) touch-ups. Anyway after the primer and preshading, I made mixes for the RAF camo colors, then sprayed underside --> topside gray --> topside green. Tape made for a (mostly) solid line between topside and underside colors while the putty made for light-to-medium overspray on the camo pattern. 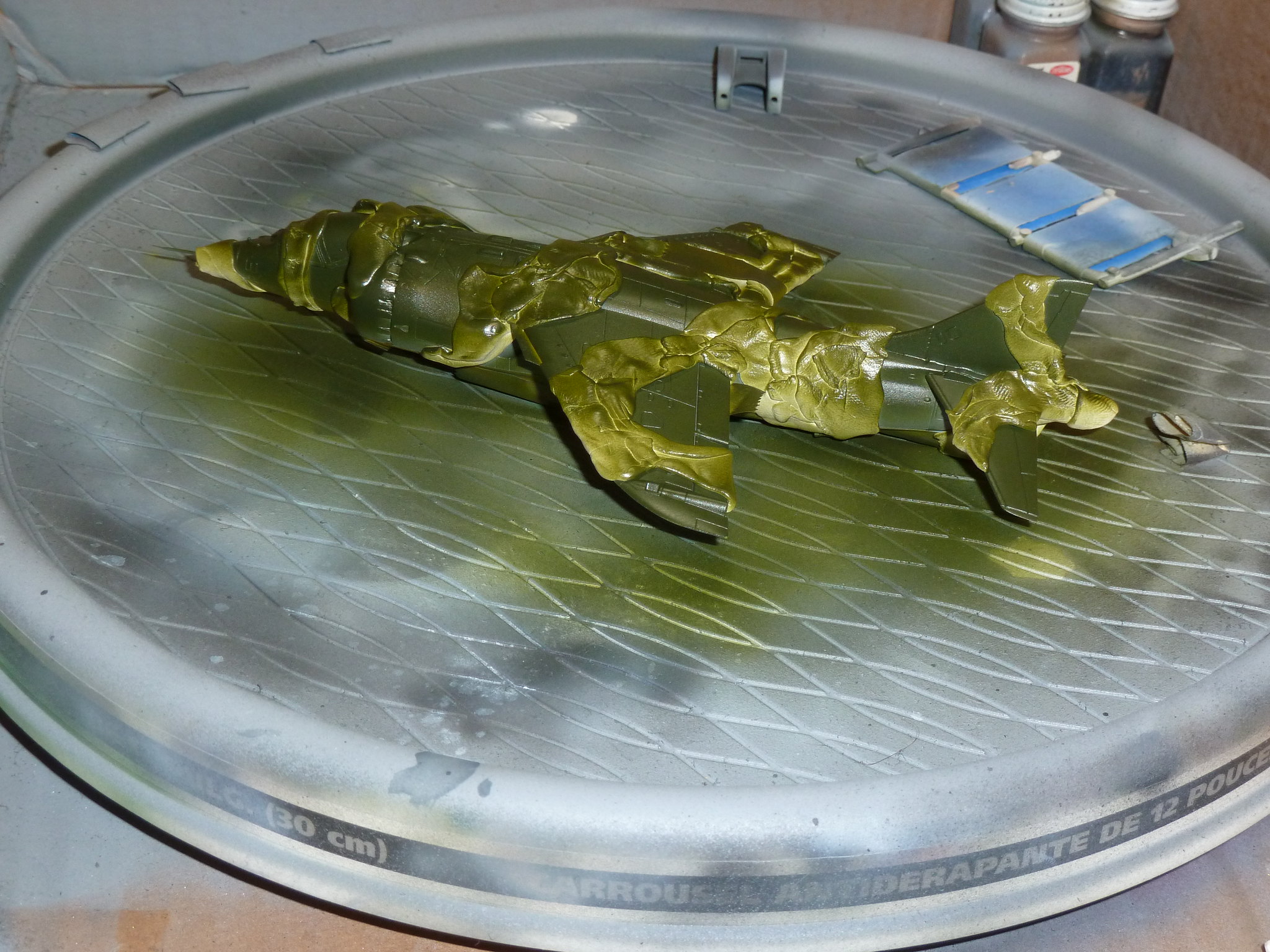 Then I forgot to take pictures for a whilemy bad.

The canopy came out well with the Canopy Survival Kit + Micro Mask combo. The vinyl tape was a little stiffer than working with kabuki tape, but still separated near-perfectly from the plastic without ripping the adjacent paint. The Survival Kit is certainly more difficult than a kit-specific Eduard mask set, but the price and variety is worth it if youre working with generic and broad canopies. (And that being said, I do not regret buying a mask set for my P-61 build, and would certainly get one again if I ever went up against something like an He-111!) 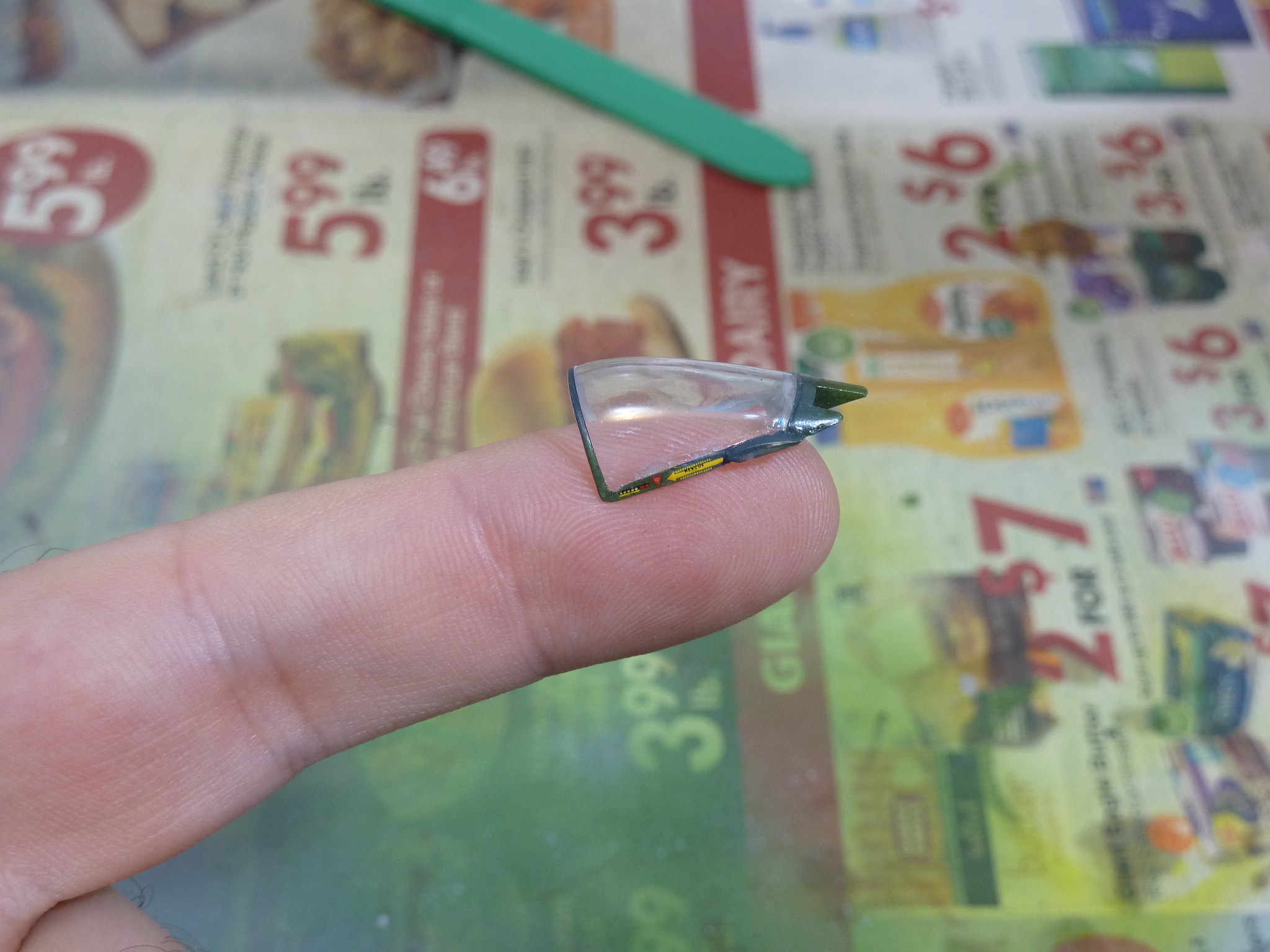 Decals were my biggest sticking point. The Airfix kit had Cartograf decals with excellent color, register, and clarity even on the minuscule stencilsbut they were all so damn thick and silvered like mad! I dont know if its something I did wrong or if its inherent with the sheet. Despite a good base coat of Future and over 10 coats of Micro-Set/Sol, they never softened up to fill in surface details nor thinned out the clear areas. 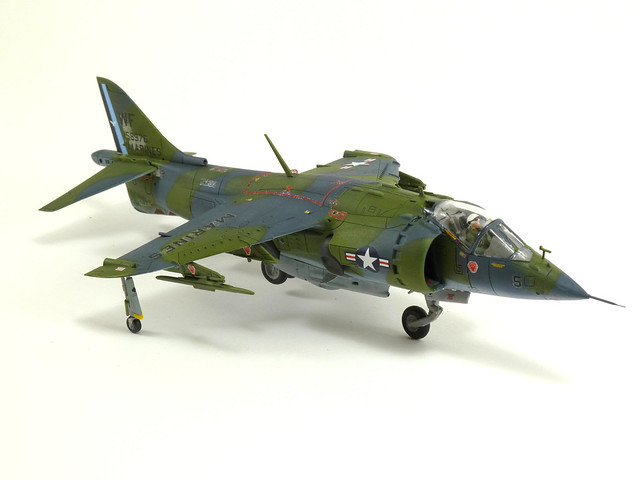 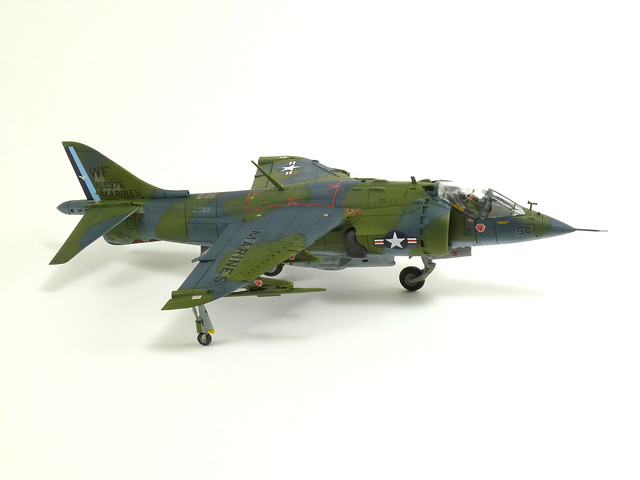 Whatever. Better done than perfect is the motto for this build. Sealed in with Micro-Flat, a panel wash with oils, a bit extra to dirty up the underside, lost a nav light to the Carpet Monster, turned around to actually defeat the Carpet Monster (!!!), then called it a finished product. 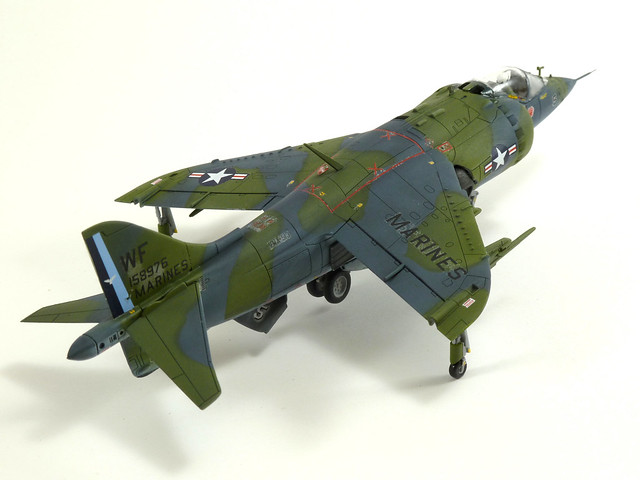 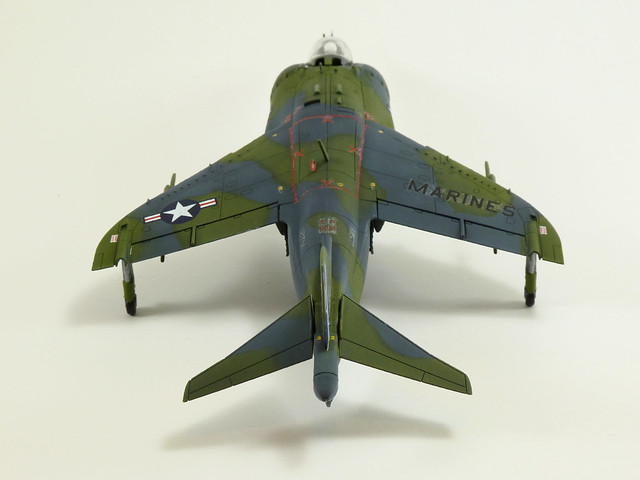 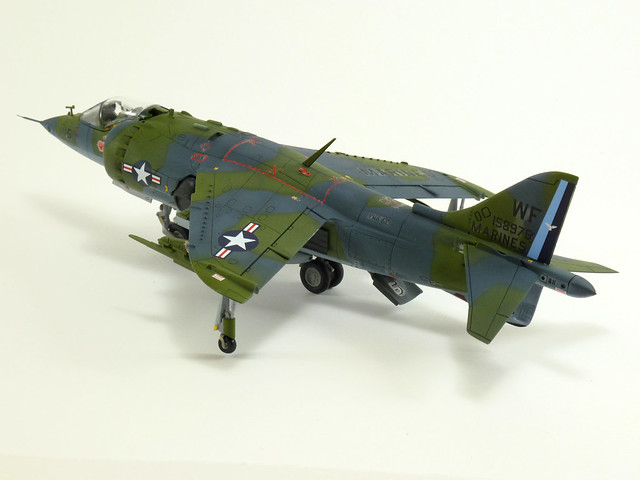 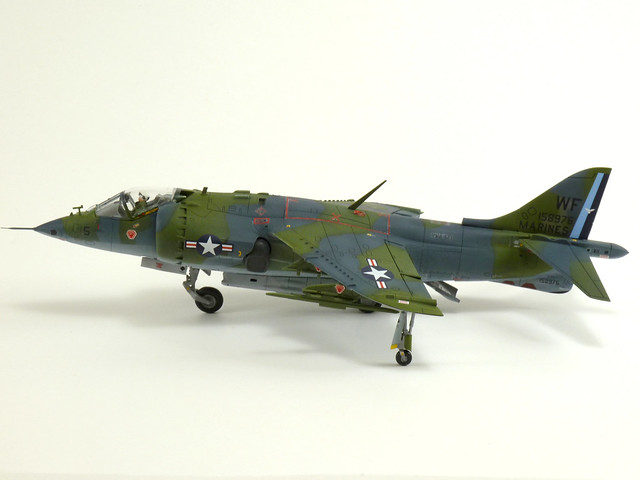 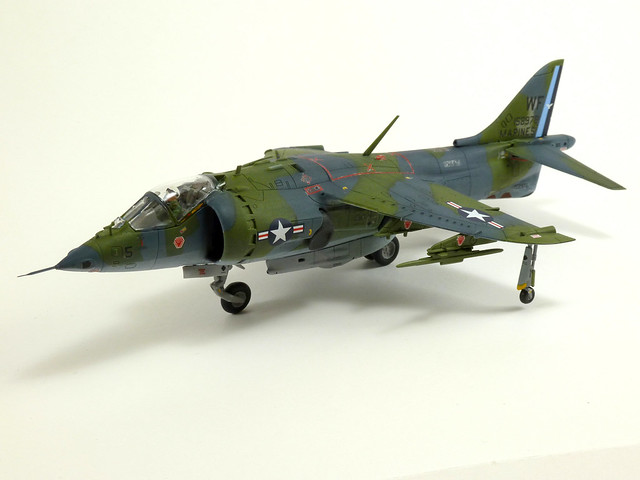 So no weapons or fuel tanks on the pylons? Initially this decision was because I wasnt going to have time to finish them before the campaign deadline. But after experimenting with the diorama layout, it began to look unlikely that the acrylic rod anchor would be able to slide in and out of the model if the inner fuel tanks were mounted. Not horrible if I wanted to keep it in place forever, but thats not my goal here. Plus there are tons of pictures of Harriers without stores, so theres no sacrificing realism here 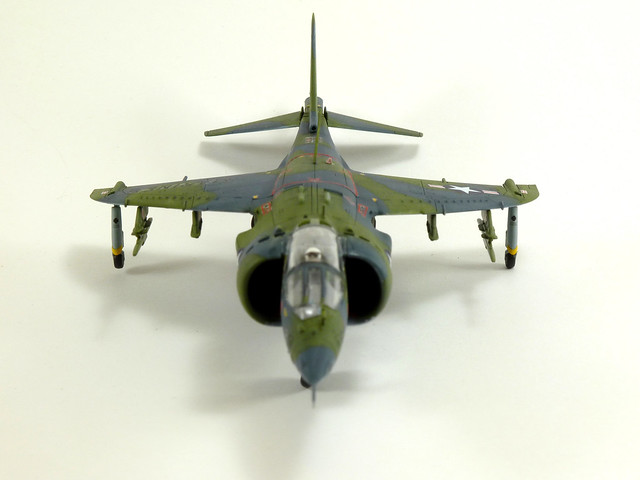 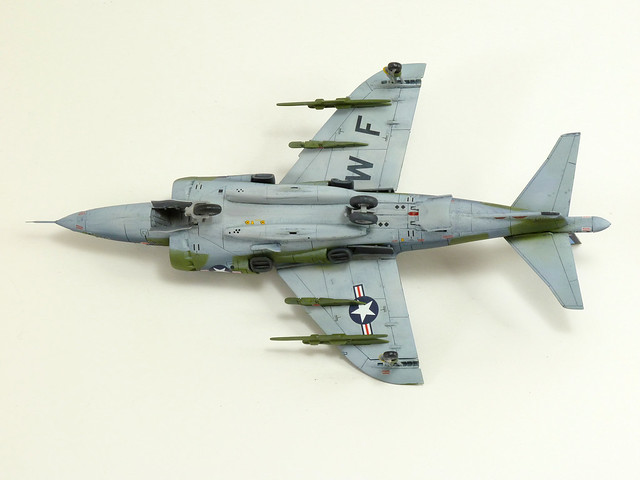 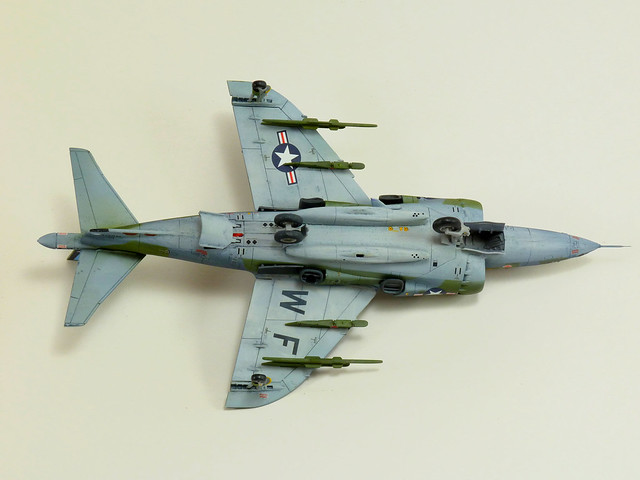 And heres a quickie mock-up of the diorama, to be completed someday in the who-knows-when future! Base is a nice little Verlinden printout sitting on a thick foam board, figures are from a Fujimi deck crew set, acryic rod is an acrylic rod. (Oh and I bought a brass pitot tube replacement after I snapped off the plastic one, though it might be even more fragile than the plastic!) Heres a short-rod version of the dio: 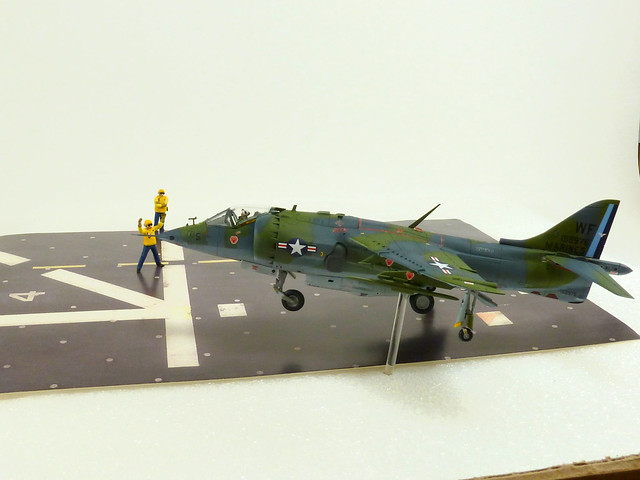 But Im leaning towards a taller version: 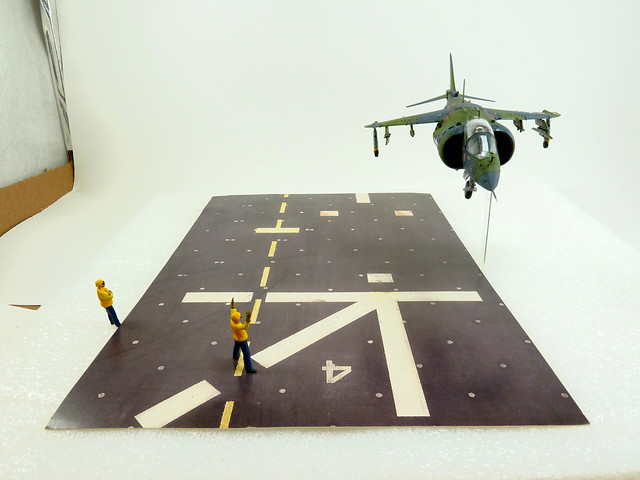 Either way, the rod will likely go through the Verlinden base to keep everything better centered. Two major issues to work out:
1. Maintaining proper balance fore and aft. Its pretty good with BBs plopped through the exhaust ports and settled in the rear, but that doesnt make for a perfect and predictable center of gravity.
2. Roughing up the bases surface. Its printed on glossy paper and it just doesnt look right. Im wondering if it just needs a few coats of flat or if I need to do something drastic like apply a thin layer of scenery water or Mod-Podge and tap it as it dries to get that heavy anti-slip flight deck texture. Suggestions always welcome! 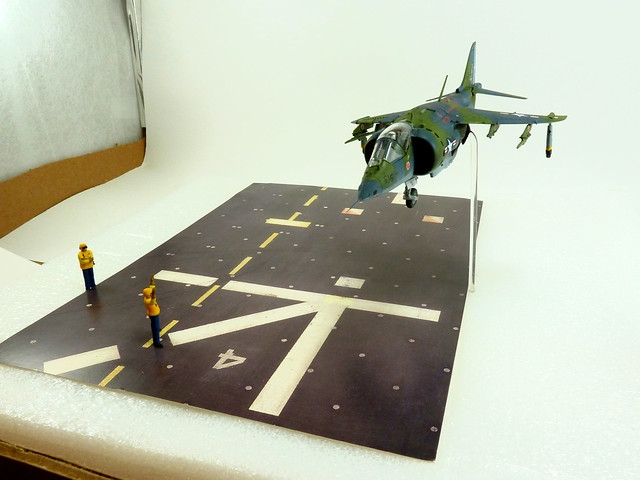 But for now, please consider my campaign entry complete! Oh and Ill have my pics in the official gallery shortlybarring technical difficulties

REPLY & QUOTE
md72 (Mark Doremus) said
Less than 24 hours to go. I've got most of the painting done, and about 1/2 the decals done. Rush rush rush. 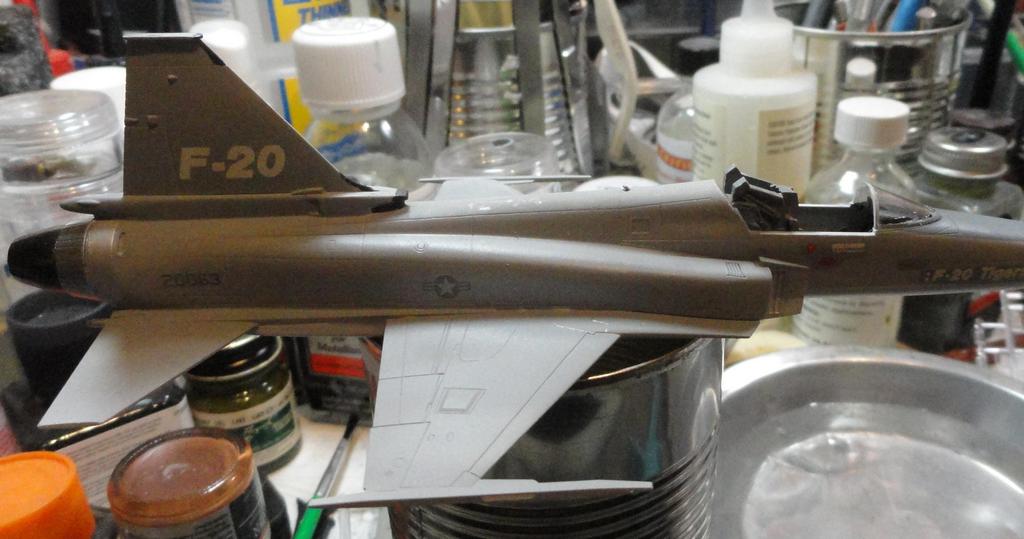 but now I gotta get some sleep. 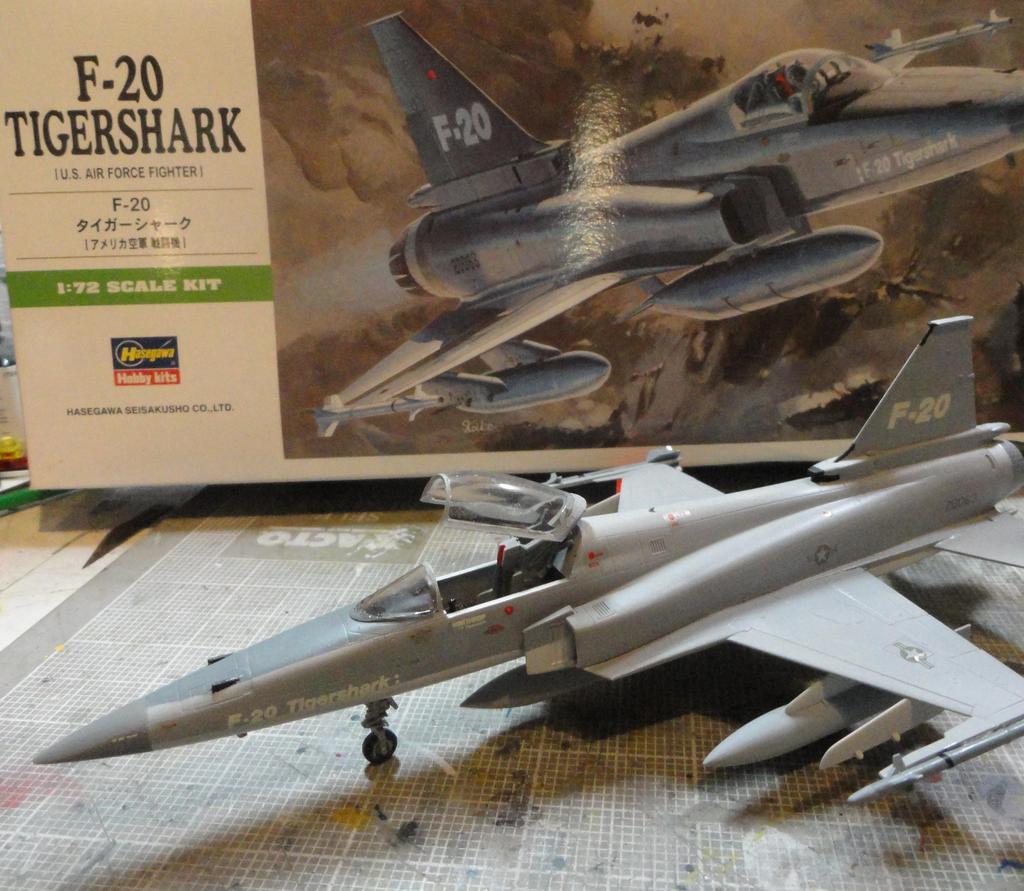 Fought me tooth and nail till the end. 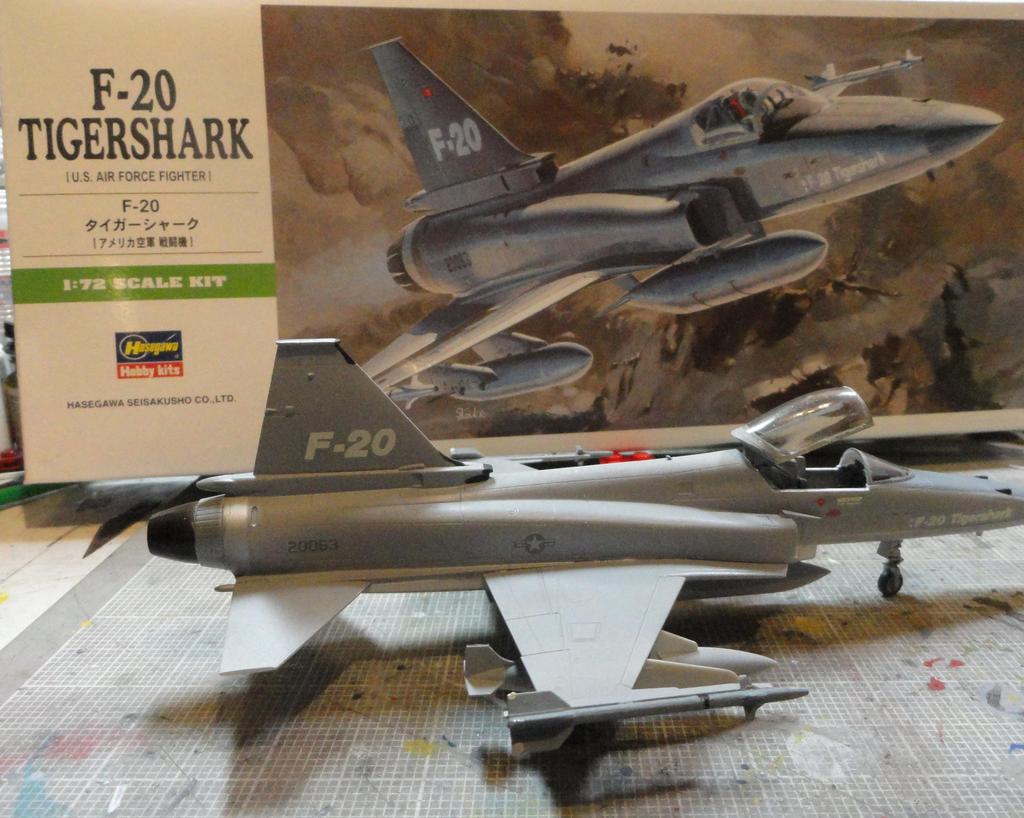 Back to fighting with the gallery page.

Rubby, what a beautiful scene with the enhanced AV-8.
Mark (md72), a nice-shaped Tigershark. I like it.

I failed with my project for this campaign. Sorry.
Happy New Year to all.
Regards,
K.

REPLY & QUOTE
md72 (Mark Doremus) said
Thanks John. The ribbon looks kinda neat up there, proud to have been pat of the design. I was a great campaign, I had a lot of fun. And just days before the campaign was over, the carpet monster released the missing instructions and decals from my original entry, the Testers F-21 Kafir.