REPLY & QUOTE
Alessandro_Iug (Alessandro Iug) said
Hi all
recently I fell in love with the Hobby Boss Vickers Mk II medium tank....
I would like to make it as part of the Tobruk defenses, I think it was used by the 7th Australian Infantry Division.
Is there anyone that could point out some reference site or a walkaround of the real thing?
Cheers and thank you for reading!
Alessandro

REPLY & QUOTE
Frenchy (Henri-Pierre) said
Here are some views of the one on display at the RAAC Memorial, Army Tank Museum, Puckapunyal, Australia :

The Bovington Tank Museum (UK) one :

Here's a close-up of the 7th Australian Infantry Division Kookaburra and Boomerang sign :

I believe the Australians defending Tobruk may have used the "Mk II Tropical" variant : it was fitted with insulation against the heat, such as spaced asbestos plates on the upper surfaces and had a ventilator mounted on the rear access door.

The asbestos plates and the extra ventilator are visible on these tanks belonging to the 6th Royal Tank Regiment in Egypt : REPLY & QUOTE
Das_Abteilung (Peter Smith) said
I don't believe that any made it as far as Tobruk. Mersah Matruh is perhaps as far forward as any went, to reinforce defences there. Apparently none were ever engaged in any action or fired in anger.

There were very few Medium MkIIs in Egypt: not more than half a dozen and maybe as few as 3. Not all had the asbestos outer cladding. They all had the radio bustle. Some were in a silver and black scheme and some may have been in a cream and red scheme. Possibly the same tanks at different times. I believe the 2 camouflaged photos will be silver and black.

By the way, and despite common usage, "Vickers" Medium is wrong. The tank was just called the Medium MkII. It was designed at Woolwich Arsenal and most were built there, although Vickers did build some under contract.

The Australians did use a number of captured Italian M-series tanks with large white Kangaroos painted on the hull and turret sides. I believe that some of these were at Tobruk. They also had a large number of the Italian 20mm Breda AA gun (as kitted by Italeri). 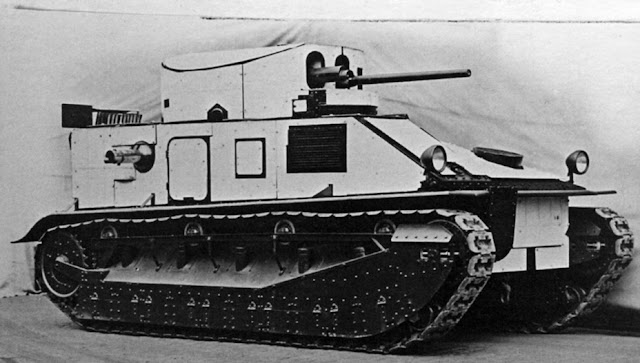 To say the truth, I haven't found any mention of Medium Mk II tanks used around Tobruk

REPLY & QUOTE
Das_Abteilung (Peter Smith) said
Look in your post in the WW2 section of Missing Lynx. I've posted a link there to some completed models of desert MkIIs also on Missing Lynx.

REPLY & QUOTE
Nahuel19431 (Omar Mario Alvarez) said
Hi Alessandro
Its excellent your idea, I have the same target, I will foll your the advances of your model. I bought the model and is waiting in its box...jajaj
Regards, Omar