Dioramas
Do you love dioramas & vignettes? We sure do.
Hosted by Darren Baker, Mario Matijasic
Baby, hit it one more time

This is my last try, now I used telephone wiring and this is the result. So let me know how it looks now.

Ryan, I was not sure about the barbed wire in front of the targets, but with your thoughts, it's enough for me. You're right about shreding clothes.

MakiWawa, please forgive me in advance

REPLY & QUOTE
SF-07-18D (Nacho Lillo) said
Not much progress these last days. Just painting some pieces on the figure. No washes yet, just paint.

I have to take the pace back...

Anyway if any of the veterans here could show some targets, it would be great.

That's from standing doing up drills with my M-Forgery at 25 Meters. Iron sights.

I like what you're doing. We did this in Iraq and Afghanistan quite a bit. We always invited folks to shoot with us as well as watch. The obscene expenditure of live ammo is always a great way to establish rapport.

First off, see if you can find a Tamiya motor from one of their old motorized kits. The armature wire is what I like to use for barbed wire. It scales out a lot nicer and doesn't cost anything. (Unless you were planning to aggravate your cat)

Our own range in Iraq was within our own little section of our COP. We had it built (Truck dumped rocks and we spread them out with a dozer.) right next to our house, photos of which you've already seen in your other diorama thread.
So we really didn't have any need for barbed wire, but don't let that stop you. Concertina wire was everywhere should you decide to use one of the PE sets that are available. I wouldn't put it in front of the targets though.

So... A brief explanation of the photos: My Team Sergeant, Bob, knew we were going to compete in the MAC 7 Regional Shoot when we returned from our deployment. Bob had the actual targets used in the match mailed to us in Iraq. Train like you fight. We would periodically go out and shoot these if weren't shooting the live ones. We also shot at night, although that wasn't one of the tables at the competition.

This is Bob and a civilian contractor shooting one night. This gal could shoot! 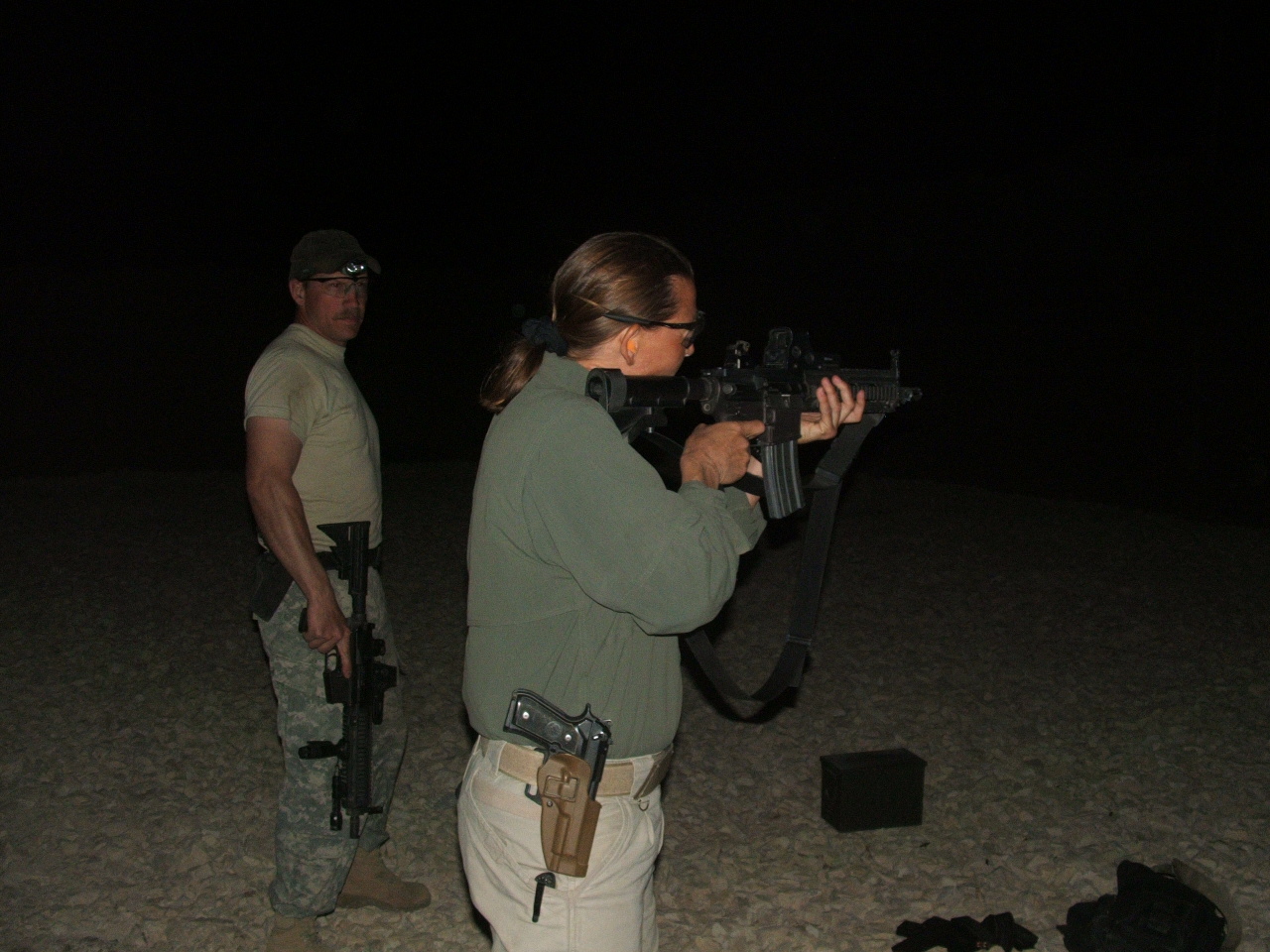 Same gal during the day:

Notice excellent recoil management, with an AKM, on full auto. Did I say she could shoot? 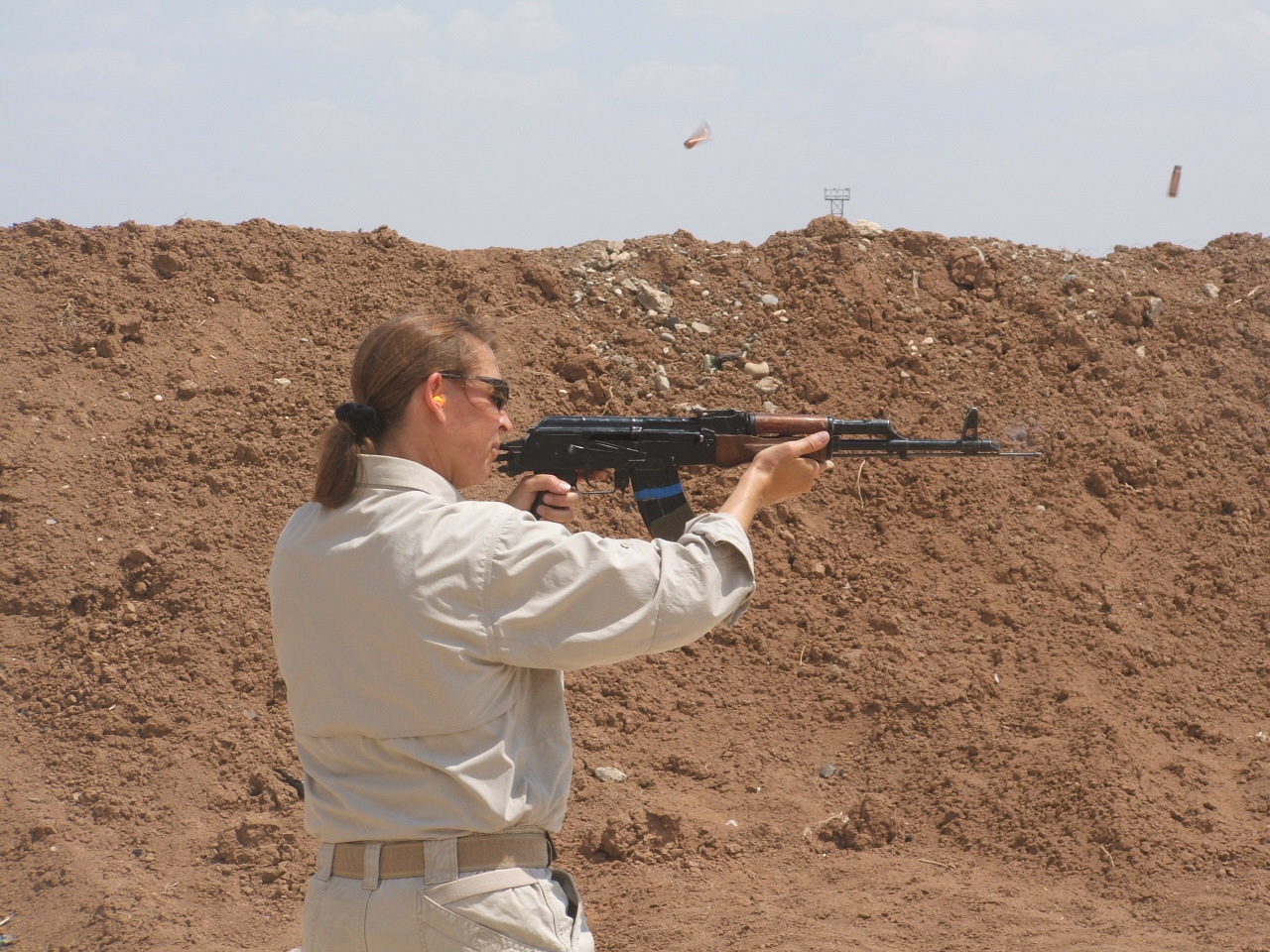 Here's Bob at the competition back in the states:

Notice how he positions himself exactly like I've told the resin manufacturers to position their figures - weapon up to his line of sight, not scrunching himself down to the weapon. Anyway, excellent recoil management and follow through as you can see. Brass in the air and he's already back on target. 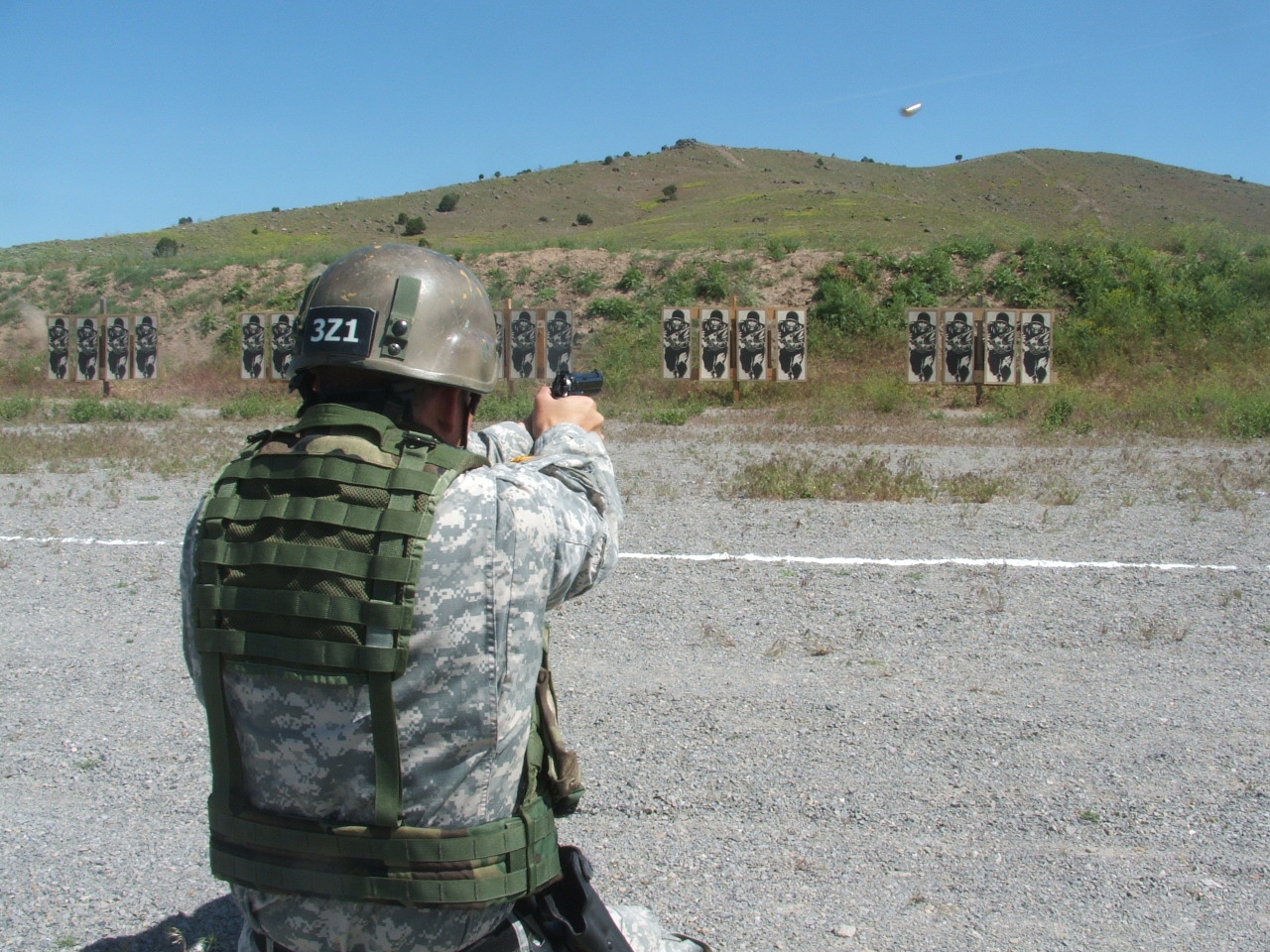 And here's me: (I can always tell it's me because I try to mimic Bob's stance, and I'm usually one of the few left handed firers...) 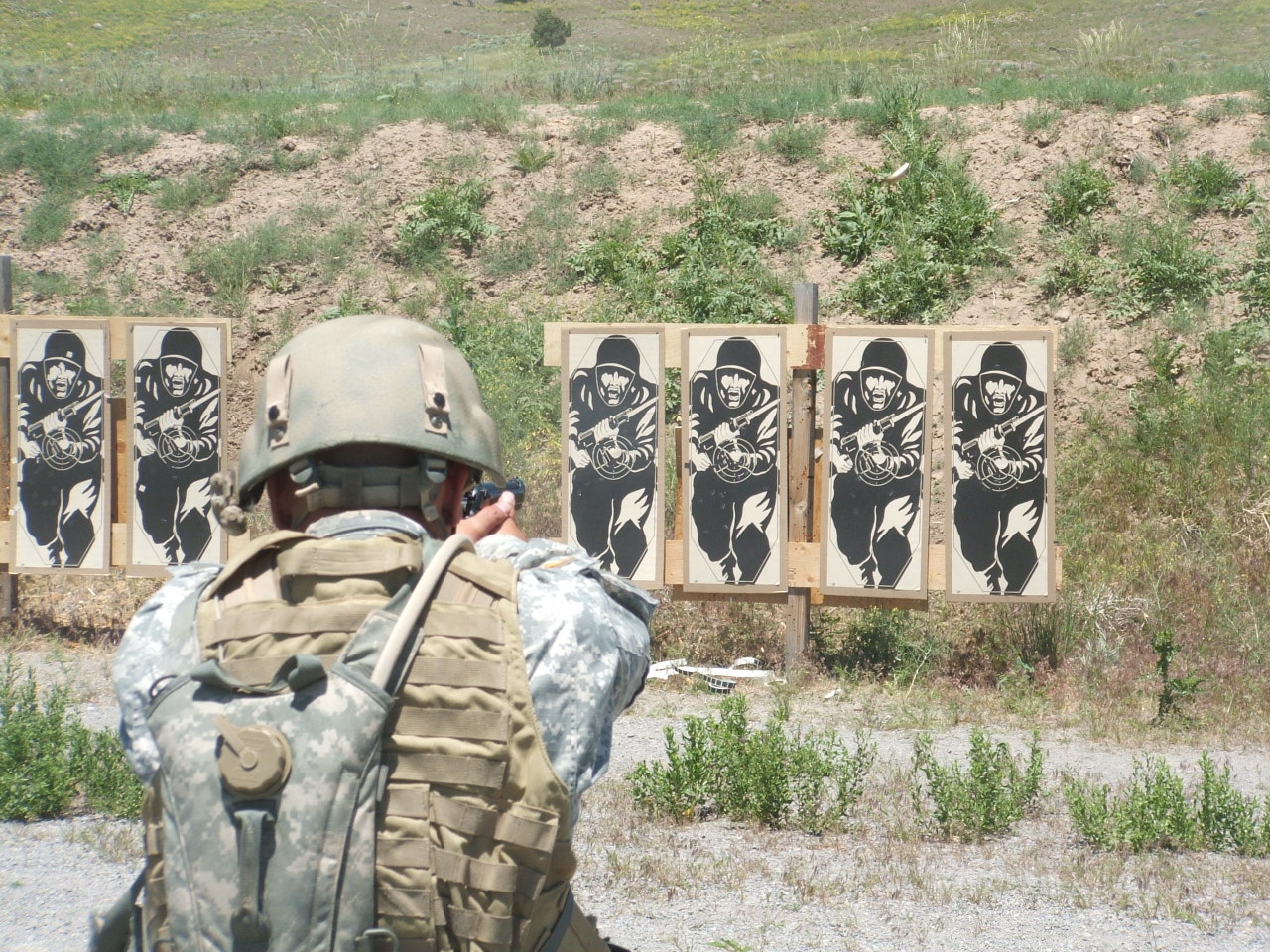 By the way, "Baby, hit it one more time" has an entirely different meaning over here.

REPLY & QUOTE
SF-07-18D (Nacho Lillo) said
Rob, thanks for your post and pictures, as always.

I´ll spread some rocks on the range as you say. But first I want to finish the figures and the trailer.

You must have so much fun at the range!! I´ve never been on a range

About the title..... I guess what you mean, but the title is about Britney´s song (Hit me one more time). My wife is a big fan and I thought on this title for her.

Good to see you again over here.

REPLY & QUOTE
Tank1812 (Ryan K) said
If your not having fun at the range, your doing it wrong.

The figure is looking great.

REPLY & QUOTE
18Bravo (Robert Skipper) said
Something else I forgot to mention: Your paper targets should be stapled to an OD Green Type "E" silhouette. Sometimes the shoulders on the paper target get folded around and stapled. Sometimes they don't. The Type "E" is usually mounted on a 1X4 instead of something as robust as what you're using.You can use thin cardboard (like from a model kit box, for the Type "E".

And since no one else is posting targets, I forgot this one yesterday - Beretta M9 at 25 m. My new SiG (the one the US Army is transitioning to) makes me look like a much better shot, so I'll see if I can find some of those shots from the range.

And since no one else is posting targets

I don't have any pics from my days and doubt anyone wants to see that pizza box quals. I didn't/don't have the nice grouping you do.

and I'm usually one of the few left handed firers...

Ha. So was I. Freaking hot brass casings down my BDU top was not fun at all. I always would loose the silly plastic deflector I was issued.

REPLY & QUOTE
cheyenne said
Nice figure painting Nacho . I don't think everyone thought the wire itself looked to big , I think they meant the barbs looked over sized . It still looks like barbed wire to me , keep at it man !!!

Sorry for the late reply. I´ve been busy at work and home, so no advances in the last week. Hopefully, this weekend will be back again.

@Cheyenne, thanks for your words, I´m glad you like the painting. About the barbed wire, I´m thinking about making another one (it would be the 5th

No more advances on the vignette because I'm starting all again. Now the base is a bit bigger and the fence is longer and I've added a door. I was not satisfied at all with the previous version, so now, let's work on V2.0

New base and fence

I've made some advances. I have changed again the fence display and made a new door. I've also painted the sand on XF59 (Desert Yellow) and added some rocks and stones (not painted yet).

Next to do is weather the fence and paint the stones. On the left side I will display 2 barbed wires, just over the pile of stones.

REPLY & QUOTE
18Bravo (Robert Skipper) said
Nacho, as per your PM request, here are two images to help you. As I said, the paper target is generally attached to another silhouette. It can be plastic (leftover target from qualification range, or made of cardboard.
either way there will be plenty of holes in them. The center is usually completely blown out.

Here's the plastic one:

And here's the cardboard one, which is usually OD green:

There are different stands you can make to support them. On a field expedient range, most are cheaply made from leftover materials.

REPLY & QUOTE
SF-07-18D (Nacho Lillo) said
Rob, thank you so much for the pics. Now I have a clear idea about the targets. I guess I could use a single pole to hold the cardboard.

Another question. For shooting the carbines, do you use the same target (E-Type) or another one. I say because now I have more room in the dio, so I can make some targets at 7cm (25m) for pistol and others a bit further for carbines

REPLY & QUOTE
18Bravo (Robert Skipper) said
We use so many different types of targets, you've got a lot of leeway. We certainly use "E"s for 25 m up drills on the carbine. For even more fun, make some steels for pistol, and maybe even try your hand at making bowling pins. You might even get lucky and find that there are some out there that are close enough in size.

REPLY & QUOTE
SF-07-18D (Nacho Lillo) said
@18Bravo, Rob thanks again. I'm not going to try any bowling pin, but the steels look a great idea. I'll tru to make some with a brass sheet I have at home (the one I used to make the targets before). I'll look for the measures. The E type targets will be for the carbine at 50m (picture below).

@hemblecreations, thanks for your words!!!

Here are the pictures with the last updates. Some weathering in the the surface. And the last one is with the marked distances for the targets and the X for the shooter.

Guess what Ive been watching?
Dan

REPLY & QUOTE
Looking to meet other MN Armor modellers. I live in Buffalo.

What do you think about this system for the steels?? 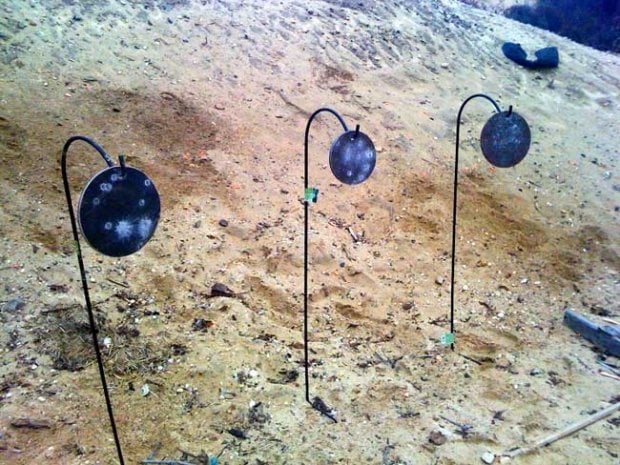 EDIT: One more question, I´d like to know your opinion. Would you make a sand mound behind the targets???

REPLY & QUOTE
18Bravo (Robert Skipper) said
Those will work just fine. They don't have to fall as a lot of designs allow. The purpose is to get immediate feedback after each shot, for scoring or for your own edification. I know at SFAUC we fired on 8 inch quite a bit with pistol. We had a few steel silhouettes for longer ranges. A sand berm behind the targets depends upon where you are and what's beyond your targets. We had T walls behind our targets (photos again in that other thread of our house) so we didn't need a berm. A few Hescos would work as well.

I have no room behind the targets for a Hesco, neither for a T-Wall.


Thanks again, Rob. Your help is very useful.

Pat Benatar , Hit Me With Your Best Shot , redo title .